The Malaysian Court of Appeal allowed the appeal by McCURRY RESTAURANT (KL) SDN BHD against a passing off action by McDONALD CORPORATION. The judgment was delivered by Justice Gopal Sri Ram on 27.4.2009.

McCURRY offers Indian and other Malaysian cuisine while McDONALD is a well known fast food chain.

The learned judge held that one must look at a mark or get-up or logo as a whole and not merely one element in it.

In the course of his judgment the learned judge made the following observations:

The learned judge also distinguished the decision of the Hearing Officer in the United Kingdom Trade Mark Registry, in the Matter of Application no. 1412458 by Sabbir Mehta, Osman Mehta, Imtiaz Ahmed Mulla and Hanif Patel to Register the mark Mclndian. There, the Hearing Officer found for McDonald’s on the ground that Mclndian could be confusingly similar to the McDonald’s family of marks all employing the prefix “Mc”.


"What the learned trial judge in the present instance appears to have overlooked is the fact that Mclndian not only sold Indian food, but also Southern fried chicken, cheeseburgers, French fries and shakes which are the very items that McDonalds also sell.".

His Lordship quoted with approval the decision of the Singapore Court of Appeal in McDonald’s Corp v. Future Enterprises Pte Ltd [2005] 1 SLR 177 which distinguished the Mclndian case from Yuen Yu Kwan Frank v. McDonald’s Corporation [2001] WL 1422899 where the court disregarded the objection of McDonald’s and al lowed the registration of the mark “McChina”.

Thus, the Court of Appeal concluded that there was no proof of the tort of passing off in this case and the trial judge has failed to appreciate the most important pieces of the evidence presented at trial.

In our opinion, the Court of Appeal decision is correct. The distribution channel and audience of the respective parties are clearly different. Thus, an action for passing off must fail for lack of misrepresentation.
Posted by Webmaster at 3:34 PM No comments: 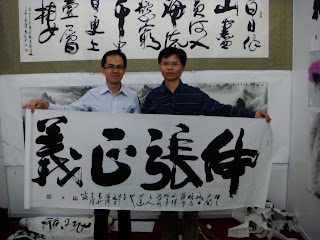 北京书画家韦军民（沧涛）赠墨宝《伸张正义》。
Posted by Webmaster at 6:04 PM No comments: 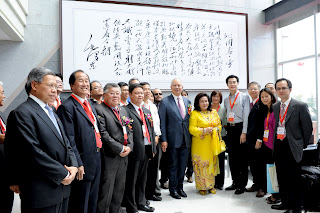 点击全文报导
Posted by Webmaster at 5:38 PM No comments:

2008 Visit to Beijing's The Great Hall of the People 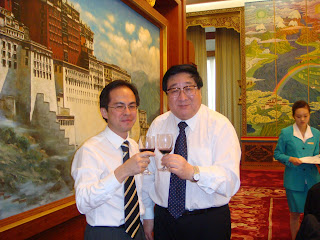 点击线上报道
Posted by Webmaster at 3:59 PM No comments: